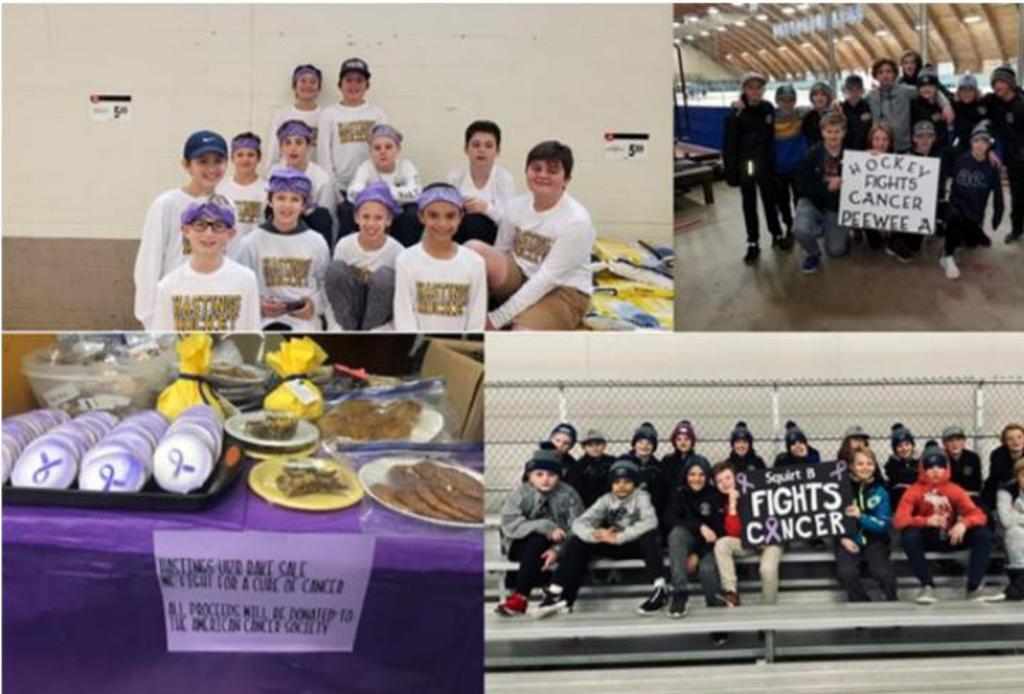 Thank you for supporting a 2019-2020 Hockey Fights Cancer event for American Cancer Society. Thanks to the enthusiastic Hockey Fights Cancer game coordinators, players, coaches and team managers, generous donors and the hard work and dedication of the hockey community, more than $35,000 was raised by Minnesota hockey teams to support patient services such as American Cancer Society Hope Lodge and Road to Recovery. Minnesota is home to two Hope Lodges which provide complimentary housing for cancer patients and caregivers when the best treatment option is outside of their home community. In Minnesota, Road to Recovery is powered by more than 200 volunteers to provide cancer patients a free ride to treatment. American Cancer Society would not be able to provide these free services without the dedicated support from our community.

This hockey season, 84 teams across Minnesota hosted a Hockey Fights Cancer game. It was incredible to see the creativity and dedication each team brought to their home rink. Balloons, candy sales, chuck-a-puck, visits from Nordy and even custom jerseys brought awareness to the fight against cancer and honored loved one impacted by cancer. In recognition of their hard work and dedication to Hockey Fights Cancer, we are excited to announce our top three fundraising teams, the winner of The John Gegen Cup and the winners of the Cap George MVP Award.

The John Gegen Cup honors the association each year that raises the most funds from November to April as part of the NHL campaign benefiting the American Cancer Society. Additional information about John Gegen Cup

Congratulations Hasting Hockey Association for raising a total of $14,379!

The Cap George MVP Award honors the individual(s) each year that distinguish themselves in their efforts support their associations to raise funds as part of the NHL campaign benefiting the American Cancer Society. Additional information about Cap George Award

Alissa led the charge for the top fundraising Association, Hastings Hockey Association. Alissa was on the forefront of the effort to get more teams involved and helped develop new ideas and create a better experience with the new Minnesota Hockey Fights Cancer effort. Alissa led the charge to make sure the teams had enough of the “I Fight For” signs and the teams efforts to create events around the games were great. The events included ribbon sales, bake sales, ceremonial puck drops and there was lavender everywhere. Alissa also made sure that posters were made to promote the events in the month where they focused their efforts. Alissa checked in weekly, and sometimes more often, to find out which of her association teams had not designated their HFC game yet. Hastings led with having the most teams with designated games, no doubt due in large part to Alissa’s efforts to support them and make sure the games got designated.

The 2019-2020 effort got off to a start in November 2019 with a focus just on District 8, but shifted gears in January 2020 with a social media and email marketing effort focused on the entire state. Michelle approached Minnesota Hockey Fights Cancer with the idea of getting their entire lower program engaged during their Hockey Hoopla tournament. Due to the Coronavirus Pandemic the tournament didn’t happen, but Chaska Chanhassen raised the greatest amount of money in the month of February 2020 and ended up third among all associations. Just the number of “I Fight For” signs that the American Cancer Society provided for Chaska Chanhassen was indication of the huge possibilities for what Hockey Hoopla could have been.

The John Gegen Cup, awarded by Minnesota Hockey Fights Cancer, honors the association each year that raises the most funds from November to April as part of the NHL campaign benefiting the American Cancer Society.

Eight years ago, at the age of five, John Gegen was diagnosed with Stage IV High-Risk Neuroblastoma. He endured 18 months of a very difficult treatment regimen, followed by a 2 year clinical trial. John spent many weeks in the hospital during that time. Anyone that walked into his hospital room quickly learned of his love of hockey! The walls and shelves were adorned with hockey posters, hockey jerseys, mini hockey sticks, and a hockey game was almost always on the television. John’s favorite sport was just the diversion he needed. Today, John is a 13 year old hockey loving, hockey playing , cancer survivor!